Blame it on Charlie Rose: A nerd’s 2012 Shakespeare resolution

So, I’ve been pondering New Year’s resolutions and decided what one of them will be: to read the complete works of Shakespeare.

Blame it on Charlie Rose, the hero of my better self, who with his passion, gentle humor and endless curiosity never fails to engage my mind and curiosity through the discussions on his PBS talk show. Occasionally, he chooses a topic on which to build a series of shows, the most recent being “Why Shakespeare?” After looking at his website, I found that it started back in November, but I’ve been behind on watching the shows in my queue.

Just today, Rose’s December 28th show caught my eye because of the lineup: Liev Schreiber, Jim Schapiro and Ken Branagh. Hadn’t heard of Schapiro until today, but the names bookending his are very familiar. So I watched the show and it stirred my fascination with Shakespeare once again.

Liev Schreiber talked about performing the Scottish play and the music of the language found in Macbeth’s speeches. Ah, yes. Familiar territory for me. The sound of Shakespeare’s lines has drawn me in from the beginning—the flow of one word building upon the next, the rhythm of the lines, the familiar juxtaposed with the strange. Even before the meaning of even one line of the Bard’s work became clear in my mind, it was the words’ music that made me listen, read, want to understand.

Jim Shapiro spoke of King Lear, a play I have not read and never seen performed. Schapiro, a Columbia University professor, has an upcoming book called The Year of Lear: Shakespeare in 1806. Hearing Shapiro explain why Lear speaks to him made me understand a little more why I’ve heard so many of the actors I admire speak of looking forward to the opportunity to perform the lead role when they attain the appropriate age with all the longing that adolescents use when saying, “I can’t wait till I’m old enough to get my driver’s license.”

Then, Ken Branagh discussed the importance of continuing to ask Rose’s question, “Why Shakespeare?” Branagh recently reread King John (another of the plays I’ve never read) and commented on how pertinent it was for today’s world. “If you read King Johnright now and then put it down and…pick up The Economist” and read about the Greek debt crisis….” Hmm. Perhaps I should read that one, I thought to myself. 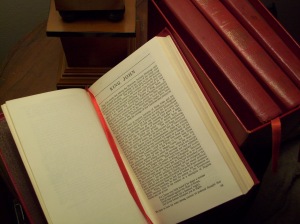 My set of Shakespeare's works. Taking my first look at King John.

And so the New Year’s resolution popped into my head. I got up, pulled down my boxed et of Shakespeare’s works and found the volume containing King John, put it on my nightstand, and then decided I’d need a bit of outside pressure to live up to the challenge. Blog, the muse, demanded, so blog I have.

What have I gotten myself into?

Succeed or fail in this 2012 resolution—at least that will be something to blog about.

2 Responses to Blame it on Charlie Rose: A nerd’s 2012 Shakespeare resolution